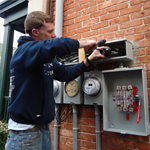 Often, local homeowners will attempt to make repairs on their own, and occasionally this can lead to disastrous results. Instead of making use of reputable residential electrical services in Pittsburgh, some will make the assumption that a quick fix and a YouTube video should be enough to make both simple and complex repairs, leading to mistakes that can even be dangerous. Below are some of the most common mistakes homeowners make with DIY (do-it-yourself) electrical repair. If you don't feel comfortable doing electrical work, don't: call an electrician in Pittsburgh, Pa. who can make those repairs for you.

By far the most common DIY mistake has to do with the most important electrical conduits in the home: electrical outlets. Until around the 1960's, two prong outlets (outlets with two slats) were the norm for home wiring. Later outlets had a third round hole attached, which was a grounding outlet-- it catches extraneous electricity and grounds it, so that it doesn't spark off randomly, risking a fire. Unfortunately, many homeowners, unaware of what that grounding actually is, will simply replace the two-prong outlet with the three-prong outlet, leaving the grounding outlet attached to nothing. Having outlets tested by qualified Pittsburgh electrical repair professionals will help quickly put an end to a potential fire hazard.

Another common problem that homeowners have when attempting DIY electrical work is a lack of attention to wiring: specifically, a lack of awareness concerning wiring exposure. This leads to two common mistakes.

Splicing wire is often necessary to create new connections for new areas that need electricity. However, professionals know that wire that is connected and then properly covered leads to an open splice, where electricity is traveling almost (if not completely) unsheathed! In places where there are a number of flammable objects (such as in a basement or attic) such connections are incredibly dangerous, and can cause a fire.

A second mistake is leaving unprotected electrical wiring in occupied areas. Areas such as where people live and work that are near unprotected wiring are a danger, and should be taken care of immediately. In a properly wired home, such connections should be behind a wall, or in an electrical conduit under the floor. Local professionals immediately spot such red flags and will ensure that such connections are safely placed out of the reach of others or risk of fire.

One of the biggest mistakes that homeowners make (and this one is extremely common) is to deal with rooms that don't have power by using really long electrical cords. Often they'll get taped up and become a permanent part of the electrical landscape. This is a huge mistake, as these are effectively ungrounded, open electrical conduits and should never be used, as they are a safety risk. New electrical connections should be made, and these can be easily done by a local professional.